Utique, is a site belonging to the region of Bizerte, it is the largest archaeological site in this region. It belongs to a small village called henchir Bou Chateur, with a few inhabitants, belonging to the natural region of the plain of Bizerte. In ancient times, this area was characterized by a sea that reached the ruins of Utica, which was transformed after centuries by the alluvium of Wadi Medjerda.

This agglomeration spreads over the Bizerte plains, at an altitude of 30 metres above sea level. Its geographical position in decimal degrees is X: 10°; Y:37°.

The site was the subject of the GIS application and bears the IPAMED identifier: “23007SO067” and covers more than 104 Hectares, with about 35 monuments.

A prehistoric occupation is attested as early as the Neolithic period. Carved stones, as well as traces of a hearth containing some coals and the remains of fossilized animal bones, attest to the fact that the first humans stayed there during prehistory.

Of Phoenician foundation, Utica is reputed to be one of the oldest cities in the Western Mediterranean. According to Pliny the Elder, the city was founded in 1178 years before the publication of its Natural History, that is, in 1101 p.C. The same date is also designated by Pseudo Aristotle who places the origin of Utica in 287 years before the foundation of Carthage, a date confirmed by Velleius Paterculus who placed the foundation of the city nine years after that of Cádiz.

This city-state was formed as a result of the commercial necessity of the Phoenicians, it is simply, one of the trading posts founded by the Tyrians, a stopover that may be indispensable in their journeys from Tyre to Cadiz and the land of Tarshish.

This city, whose anteriority several writers admit to having been a contribution to Carthage, had an independence from its metropolis Tyre, content to send it the customary tribute every year.

It should be noted that archaeology has not confirmed this anteriority until now, no archaeological remains, prior to the 8th century is still unearthed by excavations.

Interventions on the site began in the 19th century. The first excavation work seems to have taken place between 1815 and 1856 with Count C. Borgia, then N. Davis in the sector of the promontory. In 1878 and 1880, the excavations of B.Smith and I. began. Herrisson. In the twenties, and during a one-month companionship, J.Martin excavated the tombs. In 1948, P. Cintas began his excavations in the site and more precisely in the Punic Necropolis and unearthed the area of Roman houses.

In 1949, at the request of a mission under the aegis of the Department of Antiquities and Arts, an excavation was carried out by F. Reyniers who excavated the area of the Great Baths.

In the autumn of 2011 a new research programme began at Utique under the joint direction of Jean-Yves Monchambert (Paris-Sorbonne University) and Imed Ben Jerbania (National Heritage Institute of Tunisia). It concerns the pre-Roman levels of the city, in particular the archaic levels of the Phoenician and ancient Punic periods.

Three conventions have been signed between the INP on the one hand and the University of Oxford, Paris IV-Sorbonne and the Institute of Phoenician Studies of Madrid on the other.

The aim of this research project is essentially to find the remains of the Ancient Port as well as traces of the Punic period habitat. It will also be a question of resuming old excavations carried out on the forum and its surroundings (temples, houses…).
This research will be accompanied by a program of restoration and enhancement of a large part of the site.

In addition, the National Heritage Institute and the Agency for Heritage Development and Cultural Promotion have begun a safeguarding program with the closing of the archaeological zone, restoration of the mosaic pavements kept in place, development of a visitor circuit with supporting signage, illumination of the archaeological remains (Roman house district and Punic necropolis).
Finally, a new museum will be set up at the entrance to the site.

In addition, the National Heritage Institute and the Agency for the Development of Heritage and Cultural Promotion have begun a safeguarding programme with the closure of the archaeological zone, restoration of the mosaic pavements kept in place, development of a tour circuit with supporting signage, illumination of the archaeological remains (Roman house quarter and Punic necropolis).

Finally, a new museum will be set up at the entrance to the site.

The components of the site

The ancient site of Utique is bordered to the north by the Bizerte plain, to the south and west by the wadi of Medjerda. The area covered by the sector plan is approximately 140 hectares[1]. The ancient ruins are crossed by a road linking Tunis to the north-eastern coast, thus dividing the site into three parts.

Utica – General view of the site

As for the Punic dwellings, we have only weak vestiges, it does not go back higher than the VII century B.C. They were found towards the headland, they were built in mud brick on rubble stone bases, but the richest Punic houses were made of sandstone from Cap Bon, the interior walls were covered with very fine stucco (according to a survey made in the house of the historiated capitals).

The Roman quarter whose clearing was started in 1948 is the best preserved, this quarter includes three Insula, the average width of the streets was originally 5m but the Decumani were narrowed to less than 4m by the construction on track. The best preserved houses are located in the north-eastern part of the city.

It is named after a mosaic of one of its fountains, having a rather wide double door leading to a vestibule. From this vestibule one reaches a U-shaped recess which allows one to enter the peristyle around which the reception rooms are arranged. On the U-shaped recess, opposite the door, there is a rectangular basin with white marble edges, which normally supported a basin.  The bottom of the basin is occupied by a mosaic depicting a sea full of fish. The peristyle surrounds a garden (Viridarium) with a basin in the centre, which takes the form of a Roman theatre. It once supported a sculpted group from which water gushed out and nothing has remained. The peristyle of this house is paved with a white mosaic..

It is located to the east of the house of the waterfall, it seems to date from the 1st century A.D. This house can be accessed through 3 large doors.  These doors lead directly to the north portico of a peristyle where the courtyard is lined with 12 columns, two of which are topped with figurative capitals.

It occupies lot 5 of the insula, and owes its name to the hunting scenes that appear on one of the mosaics that paved its floor. The house had a peristyle in Opus Sectile. The living rooms are arranged on 3 sides of the small courtyard.

Utica – the house of the hunt

It is located to the east of the waterfall house, it too is organized around a peristyle courtyard with a semi-circular basin. The west wing of the house has been reserved for a series of shops opening onto the West Cardo.

In the Punic period, Utica had only one necropolis. Very important, located south of the city, it was well recognized, and it extended below the plateau that dominates the enclosure of the peninsula.

The burials were implanted from the southern limit of the town. In the shape of a half-crown oriented North-West. Later, the necropolis expanded to the south, west and north.  At the apogee of the Punic city, the necropolis thus occupied a rather considerable space of about 4 Hectares. However, only a small part of the burial and cremation burials that composed it (about 400) could be found… The tombs that can be found in the necropolis are of several kinds:

To the west of the paved passage, north of the large porticoed avenue that crosses the city, we see the remains of a large italic type temple facing west, it is a temple that dates back to the Republican era. It is a hexastyle-prostyle temple of italic type (i.e. with a full podium).

Composed of a quadrangular square surrounded on three sides by colonnaded porticoes, many shops leaned against the outside walls to the north of this square.

Situated along the marine shoreline at the foot of the NW side of the promontory, now they are at the western end of the site in a marshy area it is in a poor state of conservation. It is indeed a magnificent bathing establishment from the Roman imperial period built during the reign of Hadrian (118-138).

Semi-circular building, it is preceded by a portico, it was 95 m in diameter from north to south. Located on the hill behind the museum (south-west), it is from the Republican period.

It was located by the sea, to the right of the present road, halfway between the museum and the site, and dates from the imperial period.

It is a bowl shape surrounded by a abrupt talus, the amphitheatre is completely ruined and one of these constructions does not appear any more.

Created in 1951, this Antiquarium occupies a part of the site overlooking a platform, is surrounded by a garden with objects on display, it is 500m from the archaeological site. The current Antiquarium is the result of a construction and museography project that began in 2006, and was inaugurated on 12 October 2006.

Indeed this Antiquarium is a simple room of introduction to the visit, the idea was that the site of Utica should have a museum center.

The current Antiquarium consists of a single room and an exhibition gallery in a well-kept garden.  In this room are gathered objects from public monuments, the habitat and Roman necropolises. On the walls there is a mosaic panel depicting hunting scenes.

The exhibition room, made up of showcases, shows several types of vases, covering a wide period starting from the 7th B.C. It retraces a prosperous period in the history of Utica, which rose to the rank of capital of Roman Africa. 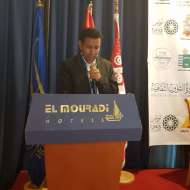